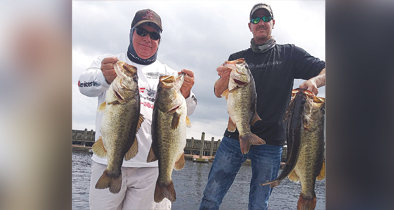 I know there are a lot of things goin’ on in everyone’s life right now, and hopefully, we can see the light at the end of the tunnel. I hope you and your family are well, and that you are enjoyin’ some good family time together.

There is some good news if you like to fish. I talked to John at Bitter’s Bait and Tackle this week and he told me that the fishin’ is great right now. It doesn’t matter if it’s panfish or bass, John reports that folks are catchin’ lots of bluegills and shellcrackers in Lake Jesup and Lake Monroe. John also reported that folks are still catchin’ plenty of specks in Lake Jesup. Folks are fishin’ the 417 bridge and catchin’ limits every day. Most of the specks are bein’ caught on jigs and minners. You can also catch plenty of big bluegills and shellcrackers on red worms. So, get the family and take the kids and spend some family time fishin’.

The bass fishin’ right now is really good, too. Folks are catchin’ lots of bass just about everywhere. John reported that the folks are catchin’ bass in most of the local lakes and the big chains as well. The Harris Chain is doin’ good and so is the Kissimmee Chain.

John said that folks are catchin’ some big bass in West Lake Toho. Folks are catchin’ 8, 9, and 10 pounders just about every day. A local bass club had a tournament there last weekend and the team of Ryan Fleck and Steve Goree weighed in five bass that topped the scales at a total of 35.61 lbs. They also had big bass of the tournament caught by Ryan Fleck that weighed 10.6 lbs. Folks, that is a nice bag of fish to take to the scales. Congrats to Ryan and Steve on their win. They caught their bass on a variety of lures, spinnerbaits top-water, and Ryan’s favorite, One Knocker. I would have to say the bass fishin’ on the Kissimmee Chain is good at this time.

Rick and I fished John’s Lake this week and the fishin’ was good for us, too. It wasn’t as good as it was for Ryan and Steve but we did catch some fish. We didn’t catch ’em like Ryan and Steve, but we had a good day on the water. We caught most of our bass on spinnerbaits, plastic worms, and slow-sinkin’ Senko-type baits.

John at Bitters Bait and Tackle also reports that the bass fishin’ on Lake Weohyakapka better known as “Lake Walk in the Water” is, in his words, on fire. Folks are havin’ fantastic days catchin’ bass. Folks are catchin’ lots of numbers of fish and they are catchin’ big ones, too. John said that it is common to catch 50 bass per day and more than likely you will catch a bass of more than seven or eight pounds. Folks are catchin’ ’em on shiners along the grass-line and submerged hydrilla beds. You can also catch ’em on chatter-baits, plastic worms, and top-water baits. John said that just about anything you use, they will bite it.

So, folks, the fishin’ is great right now and I hope you get a chance to get on the water and catch some fish. See ya next week. 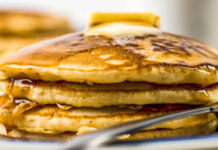 Buttermilk pancakes make a great change for a holiday breakfast 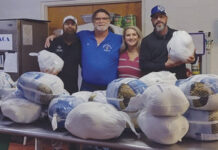 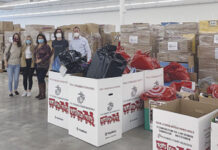