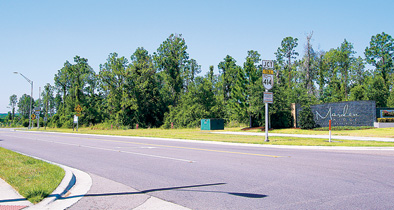 A K-12 private school is planning to move its campus from Orlando to Apopka in time for the 2020-2021 school year.

Central Florida Preparatory School officials told city of Apopka staff members Wednesday, May 29, during a city Development Review Committee (DRC) meeting that they want to move the campus for the school to a parcel of nearly 6-1/2 acres on the west side of Marden Road that is wedged between the north side of State Road 414 and the south side of Marden Ridge Apartments.

The DRC is made up of representatives of various departments within the city.

According to concept plan documents filed with the city of Apopka by the school, the pie-shaped piece of property would house a one-story classroom and office building of about 40,000 square feet and a gymnasium of about 13,000 square feet, along with an outdoor tot lot.

Currently, Central Florida Prep, as the school is commonly known, is located at 1450 Citrus Oaks Ave., Gotha, which is south of State Road 50 (Colonial Drive) in the West Oaks Mall area. It was first opened in 1990.

Because the property Central Florida Prep officials are considering carries a Planned Unit Development (PUD) zoning, a special exception, which must be approved by the Apopka Planning Commission, is needed to build the school.

The documents filed with the city state that there will be 600 students and 40 employees at the Apopka site.

In response to a question from a DRC member, school officials said Central Florida Prep would combine with Champion Preparatory School, which is a private school located at Journey Christian Church in Apopka.

During the DRC meeting, school officials learned they would very likely have to have a six-foot masonry wall built along the northern border of the parcel between the Marden Ridge Apartments and the school property.

Jim Hitt, the city’s Community Development director, told school officials that the school would not be granted a variance so that it could build the school without the wall. “I can almost guarantee you it wouldn’t happen,” Hitt said.

A wrought iron-style decorative fence would be built along the east, west, and south sides of the property.

School officials and DRC members spent several minutes discussing the traffic flow for drop-off and pick-up for school days. The school officials told city staff that those are very controlled and during a certain time period before school that no one is allowed to park a car and enter into the building that way. Students are dropped-off in a controlled area and escorted individually to the building.

The special exception approval needed for the site will go before the Apopka Planning Commission at its July 9 meeting. Approval by the City Council is not required for a special exception.

To learn more about other issues the DRC discussed, see the page 1 story of the Friday, May 31 issue of The Apopka Chief.