City officials and AdventHealth representatives cut the ribbon for a new outdoor fitness area on Tuesday, June 8, at the Northwest Recreation Complex on Jason Dwelley Parkway in Apopka.

The fitness area is one result of a partnership between the city and the hospital, in which AdventHealth is funding enhancements to recreational parks and in-kind curriculum for various activities – totaling $637,040 over a five-year period.

The fitness area has eight units of exercise equipment, a paved ground, and overhead shelter to protect users from the sun and rain.

The city selected the particular spot for the fitness area, which is located on the north side of the pond along the sidewalk at Northwest Recreation Complex. On the other side of the pond is the amphitheater.

Furnished by Californiabased Greenfields Outdoor Fitness, the exercise equipment is designed to allow users to work against their own body mass, therefore making it easy to use by almost anyone regardless of ability or fitness level. All exercise units – even those with moving parts – are virtually maintenance-free and require no lubrication.

Each piece of equipment has a QR code that users can scan with their phone to watch a video demonstration. Many of the units accommodate two to four people and promote community socializing.

The City Council had unanimously approved the city of Apopka-AdventHealth partnership at the March 4, 2020, City Council meeting. As part of the agreement, AdventHealth pays the city of Apopka $298,000 in financial contributions and $339,040 in in-kind services over the five-year period. In-kind costs over the five years include cost of labor for clinical staff and promotional items and 1,040 hours divided by five, equals 208 hours per year.

The full story begins on page 1A of the Friday, June 11, issue of The Apopka Chief. 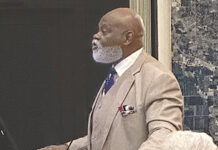 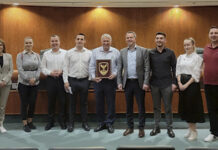 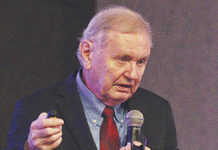 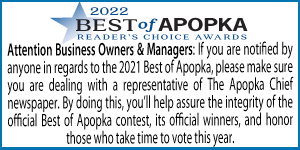