I hope everyone is havin’ a great week and you are gettin’ ready to do some fishin’. We have some rain comin’ into town later in the week. We also have a new moon this week so the fishin’ is gonna be good this week and into the weekend. The fishin’ has been real good in most of the lakes and chains in our area.

Kyle at Bitter’s Bait and Tackle reports that the folks in his area are still catchin’ some specks in Lake Jesup under the State Road 417 bridge. You can catch a few specks in Lake Monroe as well. The stripers are bitin’ in the St. Johns River. Folks are catchin’ ‘em in the north end of the river. You need to fish the mouths of the feeder creeks and the runoff areas where the baitfish are hangin’ out. You can catch the stripers on lipless crank-baits, crank-baits, swim-jigs, or live bait if you want. Large minners or small shiners have been workin’ the best.

The bass fishin’ on the Butler Chain is still doin’ pretty good most days durin’ the week. John and his nephew Chet are still catchin’ 12 to 18 bass per trip. The biggest is generally around 2-1/2 pounds.

Last week, I reported that Central Florida Bass Hunters held its first tournament of the year on the Harris Chain. The winnin’ stringer was five bass that weighed in at 32.48 lbs.  Congratulations to the team of Austen Maruelli and Isidoro De La Paz on their win. They also had a nice 7 pounder as their kicker fish. The biggest bass of the tournament was caught by the team of Warren Loudermilk and Brian Davis. Their big bass weighed 10.90 lbs. So, it’s safe to say the bass fishin’ right now is good on the Harris Chain.

I’m gettin’ good reports this week that the bass are still bitin’ on the Harris Chain. Just pick a lake out of the chain and go fishin’.

Kyle also reports that the bass fishin’ is still good on John’s Lake. You need to get on the water early in the mornin’ or late in the evenin’ to catch ’em. We will be goin’ back to Eastern Standard Time next month. So, if you like to go fishin’ after work, you only have a few more weeks left, before the time changes. Look for schoolers in John’s Lake.

Kyle reports that this is a good time of the year to catch schoolers throughout the Kissimmee Chain. Bass fishin’ has picked up a little this week. Folks are catchin’ some nice bass on shiners and Ole Monster Plastic Worms. The reports that I have been gettin’ is that folks are catchin’ some big bass in shallow water. A Jon Boat Buddies Club held a tournament on Toho last weekend and some of the biggest bass were caught in water that was only two feet deep. It took a stringer of five bass that weighed 16.6 lbs. to win the event. I don’t think the big bass are movin’ into the shallow water other than to get in the shade or in cleaner water.

Well, that’s it for this week. I hope you get a chance to do some fishin’ this week. Take along some rain gear just in case you get caught in the rain. See ya next week.

Tip of the week: new moon.

Fishin’ has slowed somewhat due to change in weather patterns 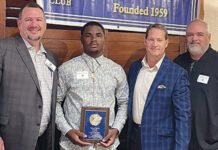 Area player of the week 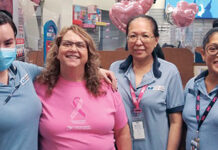