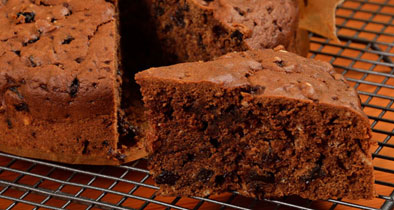 November 11, is Veterans Day. It was first called Armistice Day by Woodrow Wilson on November 11, 1919, as he addressed the American people and spoke of our enemies laying down their arms “a year ago today…” Bills calling for observance have been issued and approved in Congress with the final amendment in 1954 replacing the word “Armistice” with “Veterans,” and so it has been known since.

We cannot let this special day go by without printing the recipe for First World War Army cake that we found printed in the Florida Federation of Garden Clubs Inc., Paths of Sunshine book, and which just happens to be a special favorite of ours.

From Preserving the Big Potato recipe book published by the Apopka Historical Society, Lillian Cleghorn shares her Pork Chop and Potato Casserole, one of many that she shares with her Apopka neighbors and friends.

From Charleston Receipts, James Island Shrimp Pie is a shrimp and rice casserole contributed by Mrs. John Jenkins. You need two pounds of shrimp and a cup of raw rice, both of which you cook before making the pie. It is then baked in a moderate oven (350 to 375 degrees) for about 30 minutes or until brown on top.

Fried Catfish! Yumm. We have a recipe from Southern Living’s All-Time Favorites for one of our favorite dinners, fried catfish. You need to be sure and have all your other side dishes ready and steaming on the table when you get the catfish out of the cooking oil and drained for serving. There is nothing much to recommend cold fish!

Charleston Receipts shares Hush Puppies from Mrs. Taft Walker. This will go very well with the catfish recipe, above.

We have Mrs. Rosa Fussell’s Congealed Salad from our old friends in Plains, Georgia. They published Pot Pourri, which is full of delightful recipes.

I love Magic Cookie Bars. The recipe is printed on the Aldi company’s Baker’s Corner Sweetened Condensed Milk can. This is one of those recipes kids (and adults) love that they can do in the kitchen together. Kids are great at making crumbs from graham crackers. And they can measure ingredients. They may need a little help, but it can be fun to do together.

1/2 cup lard (no substitute for this, recipe says)

Boil the box of raisins in 3 cups of water for 15 minutes and let cool. Drain and reserve water. Cream the lard and sugar. Add alternately the dry ingredients and two cups of reserved water from raisins. Add chopped walnuts. (Fruit may be added instead of nuts.) Add cooked raisins. Pour into greased and floured loaf pans and bake at 325 degrees for about 1 to 1-1/2 hours. Test for doneness.

NOTE: This is an Heirloom Recipe.

1 can cream of mushroom soup

Fry pork chops in skillet until brown, trim off fat. Place alternate layer of potatoes, onions, and cheese in greased casserole dish. Combine mushroom soup, milk and seasonings in separate bowl and blend well. Pour soup mixture over cheese. Top with pork chops. Cover and bake in preheated 350-degree oven for 1 hour and 15 minutes or until potatoes are done.

Cook rice in salted water until very soft and stir butter into it. Combine all ingredients with cooked shrimp, adding enough milk to make mixture the consistency of thick custard. Put in buttered casserole and bake in moderate oven until brown on top (about 30 minutes). Serves 8.

Place catfish fillets in a single layer in a shallow dish; cover with milk. Cover and chill 1 hour. Combine cornmeal and next four ingredients in a shallow dish. Remove catfish fillets from refrigerator and let stand at room temperature 10 minutes. Remove from milk, allowing excess to drip off. Sprinkle evenly with 1 teaspoon salt. Dredge catfish fillets in cornmeal mixture, shaking off excess. Pour oil to depth of 1-1/2 inches into a large skillet. Heat to 350 degrees. Fry fillets in batches about 3 to 4 minutes on each side or until golden brown. Drain on wire racks over paper towels. Garnish, if desired. Makes 6 servings.

Mix all dry ingredients, add chopped onion; then milk and egg, beaten together. Drop by small spoonfuls into boiling deep fat. They will float when done. Drain on brown paper. Serves 8.

Prepare spinach by washing carefully and discarding all tough stems. Throw spinach into a kettle of boiling water and boil three minutes – no longer. Remove from fire and drain. In a heavy pan, put butter. Shake on it the flour. Blend well. Add spinach, onion, cream, salt and pepper. Heat thoroughly and serve immediately. This is equally good if thick sour cream is used in place of the whipping cream. Serves 8. 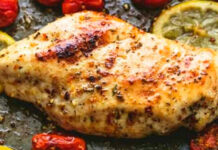 Two Italian chicken recipes, one has a sauce, one is without tomato 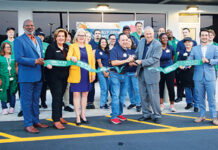 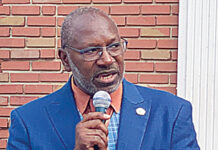